When Henri was five years old, he became close to his uncle Louis, who painted pictures. This friendship will forever change Henri’s life. The uncle passed on all his knowledge to his nephew, which later helped Henri to make a career as a photographer. Henri’s family was wealthy and helped him financially, since in those days working with photography was an expensive profession, and not everyone could afford to devote their lives to this (more about this time is just told in the course “Photography. History and Practice”). 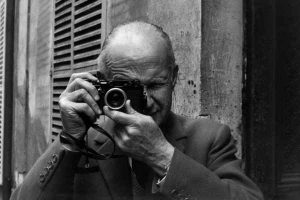 The love of art will make Henri go on a trip to Africa, where he will see so many new things that he decides to devote himself to photography forever. Remembering the stories and lessons of his uncle, Henri liked to shoot in natural light and without preparation, which allowed him to become the founder of photojournalism.

The most famous photo: Rue Mouffetard. A self-satisfied boy carries two bottles of champagne (or wine?) along the streets of Paris, a city that has almost recovered from the war. And in the background, the admiring glance of a girl. This is “seizing the moment”, as the master liked to say.

What is a step? Why are exposure settings different now?